Growing up, I’d heard a lot about Poland, where my late father had been born at the end of WW1. Ending up in England during WW2, he’d been unable to go back ‘home’ when the war ended, as eastern Poland became part of the USSR. I’d had a child’s simplistic understanding of it, that the Russians took it from Poland. Polish rule/influence over Western Ukraine (then known as Galicia) certainly goes back centuries, although those borderlands became part of the Austrian Empire from the late 18th century until the end of WW1.

In fact my father had been born when it was Austria. It was only when the Austrian Empire collapsed that the borderlands became part of Poland, in spite of the many Ukrainians living there, who felt it should form an independent Ukraine. All this helped to generate a strong Ukrainian nationalist movement that continued until independence in 1992.

At home all we ever heard about was Poland and ‘the Russians.’ Nothing about Ukrainian people.

I began to spend hours poring over the photographs. My father’s sister had lived and died in his village, and she was recognisable in the photographs as both a young girl and an elderly woman. We knew she had a daughter, my father’s niece, who was presumably the Justyna whose name was written on a piece of paper, along with the address of his village. That was all we really knew about in terms of family.

Yet the photographs showed many different people. There was a family of five, staring apprehensively at the camera against a backdrop of traditional embroideries. Another showed a large family gathering: parents in the centre surrounded by 18 other people.  Who were they? Could they be Polish relatives? Or just long-ago acquaintances?

As time went on I became fixated on filling in the gaps. I contacted a Ukrainian tourist guide whose portfolio included family research. By a remarkable coincidence he knew my father’s village and agreed to go and talk to people. I was expecting maybe a few names and dates gleaned from the cemetery.

I hadn’t expected a set of videos of people talking about my father, and retelling passed-down stories from the war. They remembered the only time he dared to visit, back in the 1970s when he was accompanied by the KGB at all times. One man even referred to my father as ‘uncle’, remembering the parcels of hard-to-get items such as razors that Dad had sent them.

Yet these people weren’t Polish; they were Ukrainian. Nor were they blood relatives. They were in-laws: the family of my father’s first wife. He’d never talked about her,  a shadowy figure who’d died very young. Suddenly she had a name – Varvara – and her sister-in-law and nephew were very much alive in the video. It was time to pay a visit.

Having travelled by train to the closest city of Ivano-Frankivsk, Terry and I set out to visit the village with Andriy, the local guide/interpreter/driver. Once again, I didn’t dare to expect much. Would people be happy to rake up the past? Would any of these people even be at home that day?

Andriy pulled the car up at a huge pile of ripe pumpkins, behind which stood the old single storey house where my father had lived with his wife and her family back in the 1930s. The nephew-in-law and his family use it for storage nowadays and live next door. Although Varvara’s brother had died some years ago, that brother’s elderly wife was brought to meet us and answer my questions. Photo after photo was handed over, eliciting mostly vague comments about them being ‘other people’. Then the large family group was recognised, with the father noted as a ‘man with 16 children’.  And finally a pivotal moment when the elderly lady pointed to herself – she was the mother in the photo of the family of five. 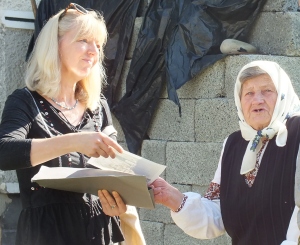 Although her husband had passed on, the three children in the photo were alive; in fact I was standing in the son’s garden (my father’s nephew-in-law). He was working away but his wife invited us inside for ‘breakfast’. By amazing luck it was a feast day: Nativity of the Blessed Virgin Mary, when family sit and eat together. The homemade vodka came out and almost half of the bottle disappeared, which was a feat considering three of the five people weren’t drinking.

I was still no closer to finding out if any actual blood relatives were living nearby but I kept on prompting them. And in a very roundabout way it eventually came out that the ‘man with 16 children’ had been the husband of my father’s niece, Justyna. The writing on the back of the photo explained how the extended family had gathered back in 1973 to see off one of the sons, Stepan, who was joining the army. Surely some of these cousins might still be alive?

Galina held my hand as she led me through the peaceful cemetery that stretched over the hillside. I had a small amount of my father’s ashes to deposit; he’d always wanted to come back. Then Galina excitedly pointed out the graves of Justyna and her husband. I could see that the large photographs superimposed onto the headstones were clearly the same people as the parents in the family gathering.  And nearby was the grave of one of the 16 children. I would never get to meet Stepan after all, as he had died in his forties. But I’d only missed Justyna, his mother, by six years. 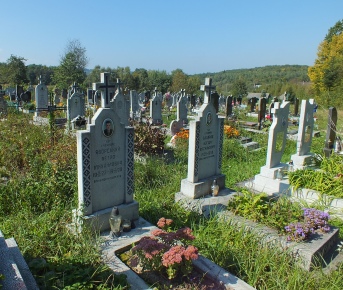 And now we had another invitation, from the mother and daughter pictured in that family of five. As our car drew up, Hanna the daughter raced out of the house and hugged us; like her mother she was touched that a photograph of her and her family had been brought all the way from England. ‘And your father sent us photos of you!’ she said. This time the moonshine was strawberry-infused vodka.

How things get turned on their head. I still don’t know whether there are living Polish relatives, although Hanna thought so and promised to find out. Instead I have a Ukrainian not-quite-family; the in-laws with whom my father kept in contact for decades, sending them parcels and photos, and visiting them that one time. They must have meant something to him.

I’d enjoyed using the dozen or so words of Ukrainian I’d learned, and when Hanna wagged her finger at me, I recognised the word for “one”, but nothing else. Andriy stepped in to explain fully: “She wants to know if you’ll come back within one year?”

“And she says she’ll have you speaking Ukrainian in one week.” Now there’s a challenge.

As the car lurched over the stony track out of the village, laden down with gifts of moonshine, preserved mushrooms and a bucket of honey, I looked back. Scattered houses with enormous metal gates, a child drawing water from a well, and the dome of the church visible through the trees. I wanted to spend a day in that cemetery. I wanted to learn Ukrainian and how to make moonshine. Above all I wanted to walk through the fields that rise gently  to the edge of the forest. One year.

With thanks to Andriy of Green Ukraine for the research, driving and interpreting.

And I’m very grateful to Natalia for translating the videos.