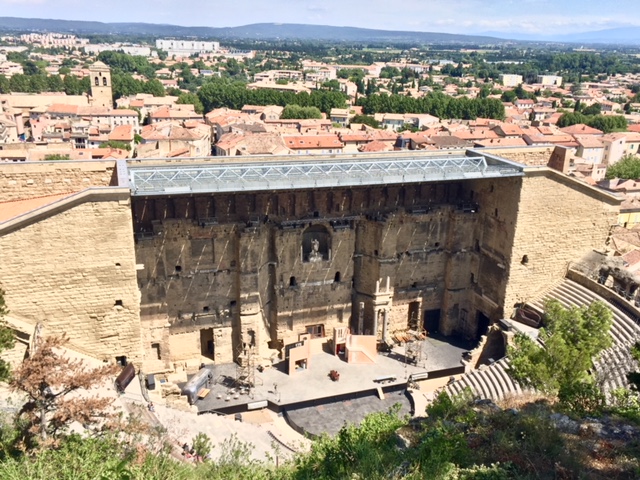 Following on from my post on reaching the Pyrenees by train, here’s the first in a series on stopover points in the South of France, featuring Orange, Provence

Possibly overlooked by its more famous neighbour Avignon, the town of Orange in Provence offers considerable charm for a short stopover.

After the six hour journey on Eurostar from St Pancras, arriving into Avignon during the festival didn’t do much to alleviate the 39°C of baking heat.  Another 20  minutes on a local train was worth it to simply step out onto empty pavements of Orange.

I’ve previously asked myself if it’s really necessary to traipse around all of the ‘must-sees’ when visiting a place, but the fact that everyone else was swarming in Avignon meant that the monuments of Orange were mercifully clear.  And the town is sufficiently compact to visit most of them on a short stopover.

The Roman city of Arausio was a staging post on the Roman road between Lyon and Arles, and the legacy is clear in the modern town of Orange.  The remarkable Arc de Triomphe stands at the ancient entrance to the city, commemorating the Roman Army’s victories over the barbarian tribes at the edges of the Empire.  The detail in the friezes is impressive – look at the Celtic-style artwork depicted on the confiscated tribal armour.

Close up of the frieze depicting confiscated ‘barbarian’ armour

The Théâtre Antique is the best preserved Roman theatre in existence, and it’s still used for performances, as shown by the crew’s Airstream parked on the stage.  Keep climbing up the tiers of seats for a view over the theatre with the tiled roofs of Orange as backdrop. 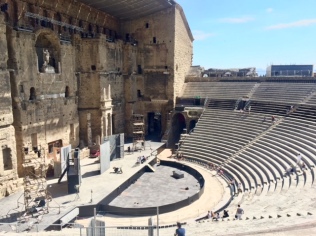 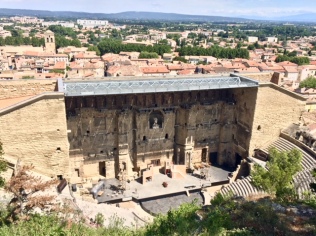 The ancient Roman theatre viewed from the Colline st-Eutrope

But don’t stop there, as a walk up the Colline St-Eutrope extends the view even further, with a sweeping view across to Mont Ventoux on the horizon.  A network of paths over the hill passes by ruins of the former castle of the Princes of Orange to a small play park with a couple of zip wires.  All of this was almost deserted on a Saturday in July, which was unexpected but allowed some unobserved fun on the zip wires.  The large open-air café was similarly deserted, with chairs and menus ready but no staff to be seen.

You could spend all day mooching around the sites of Orange, but for me it was enough to people watch in the tiny Place aux Herbes, with its laid back bar and a usefully muddled shop where the stock ranged from art supplies, Marseille soap, toothpaste and tins of WD40 – the kind of shop that simply could not survive back in England.

We stayed in the small and charming L’Herbier d’Orange in the Place aux Herbes.  Orange has plenty of restaurants, but why sit in a place that looks like everywhere else when you can eat in a Roman cave with a fine wine cellar integrated at the far end?  As the proprietors of La Cantina (Montée Julia Barthet) state, it’s not every day you can dine in a hole dug into the rock.