What’s a digital nomad? Type the phrase into Google and it’s clear that lots of people want to know the answer.  Those who know are usually asking how they can become one.  The phrase digital nomad isn’t even in the Oxford English Dictionary yet!  So here’s a nice definition from Metro online:

Somebody who works online and therefore needn’t tie themselves to one particular office, city, or even country. They can work from anywhere in the world, provided they have a solid internet connection and can move around whenever the feeling takes them.

As the article goes on to point out, there are quite a few careers that allow nomadic work; we aren’t all web designers or hipster travel bloggers writing up the day’s wanderings over the second flat white at a cafe table.  My own career is what’s nowadays called a portfolio, and an eclectic one at that.  I work as an associate lecturer in distance learning, where the digitalisation that’s creeping into education is understandably seen as an unwelcome shift to ‘everything online’, but surely it’s also presented an opportunity to be flexible in terms of working location.  I also work as an examiner/marker/assessor/scorer, all job titles that pretty much mean the same thing – reading or listening to something and giving it a mark.  Most of that needs to be done well away from public eyes but there are lots of other things that can that can be done sitting on planes, boats and trains; preparation and my own writing, for example. I once wrote drafts of two textbooks whilst travelling on trains between New York and Montreal/Toronto.  The trains were all delayed but, well, that just meant that I got a bit more written. 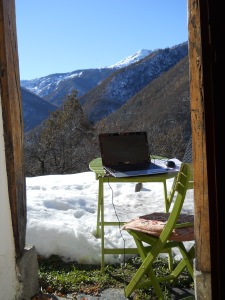 Accessing wifi has become much simpler since I began working like this, but I still prefer to use my own supply rather than public wifi. And it’s easy and cheap enough; mobile broadband dongles now work all over Europe and I find PAYG options are perfectly reasonable ; they even work with platforms like Skype.   You do get the odd total blackout, although that can happen anywhere; all telephone lines and mobile masts were recently vandalised in my home village, which meant doing essential online work whilst parked in lay-by for four days.

One place where I found myself in serious difficulty was on the island of Lundy, which has a poor intermittent signal at the best of times, but my stay happened to coincide with a big storm, stranding me for an extra day and destroying the line of communication from the mainland.  I had some urgent work to submit and just about managed it by holding my laptop, with dongle attached, out of the window while the storm raged.  I then found that I could just about send and receive emails from the top of the lighthouse.

The Metro article talks about whole communities of digital nomads working in hip places such as Bali, Thailand and so on.  I tend to stick to Europe these days, although I recall sitting on the floor of a rasta bar in Raylay, Thailand, peeping out at the late monsoon rains bouncing off the mangroves as I tried to translate an abstract concept into understandable language for a linguistics student.  It was hard to concentrate with Bob Marley playing on a loop.  But mostly I work from the French Pyrenees, travelling overland by train when I can, and making the most of the fine weather days to wander in the mountains, followed by a late-night catch-up with work.  And I live simply and inexpensively, rarely eating out and learning to be creative with stale bread.

There are downsides of course, like the occasional urgent request that requires something that’s sitting hundreds of miles away at home. Moreover, all of my work is fixed contract, which means that there’s no paid holiday. It’s difficult to justify taking proper time off when it’s unpaid.

That’s why, when people comment about me being on holiday again?, I have to remind them that it’s not a holiday, it’s just working in a different place…